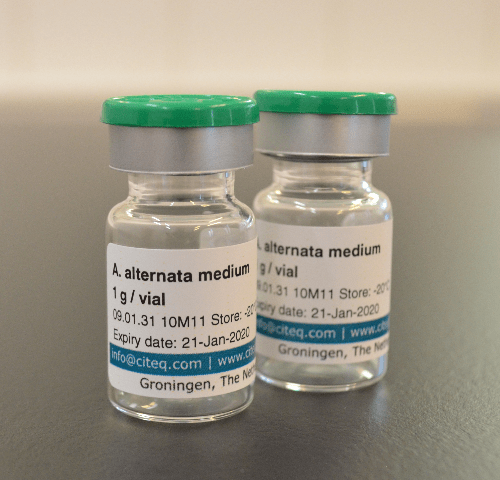 There are multiple groups of fungi that can be found all-over the world, even in the most extreme environments. The most fungi species can be found in the soil, on plant or other organic material. Fungi are known for producing major groups of compounds that can cause an allergic reaction.

One of the most imported fungus that can cause an allergic reaction is Aspergillus fumigatus. The Aspergillus fumigatus plays an essential role in recycling environmental carbon and nitrogen. The natural habitat is the soil were it survives and grows on organic rest material. The specie is not the most common, but it is one of the most ubiquitous of those with airborne conidia. The specie propagates asexually through conidia (conidiospores), which are processed on a conidiophoral. The spores can spread fast, with every conidial head producing thousands of conidia. The conidiospores have a diameter of 2 to 3 μm, this makes them small enough to reach the lung alveoli. The conidia can spread through the air. Because they are so small they are capable to stay airborne in- and outdoors. The major allergic manifestations induced by Aspergillus fumigatus are asthma, rhinitis, allergic bronchopulmonary mycoses, and hypersensitivity pneumonitis.

We have two different forms of A. fumigatus: medium and mycelium. The word medium might be confusing. Our opinion on this topic is that growing moulds are performed on a medium, above the medium the mycelium is formed. The moulds have grown for 4- 12 weeks. It starts with spores in the medium, these will grow the fungi.
There are 3 separate phases;
• The inoculation phase
• Exponential growing phase
• End phase 9 consolidation phase.

In each growing phase the mould produces different types of sugars and proteins. In the medium soluble parts of the growing mould during the whole period is excreted. Please note that there are different opinions in which part and in which phase allergenic products are produced. Science in mould culture especially moulds which produces allergens is still not finished. So we have made a choice; at harvest we separate the medium and the mycelium. We filtrate the medium so no spores are available, concentrate and dialyse the medium. This product is freeze-dried , we call this the medium part of the mould. We extract the mycelium with a specific buffer, filtrate this , dialyse this and freeze dried, this is the mycelium, part of the moulds. 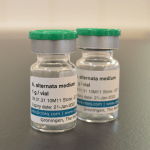